Sometimes hashtags are loaded by the devil

25th of September was a black day for the Spanish news agency EFE. It was almost ten o’clock when they posted a tweet with the hashtag #RajoyMariquita. It happened because Twitter auto-filled the hashtag #Rajoy with “Mariquita” (gay) and they pressed the tweet button without reading it. Although the tweet was deleted quickly, some users of Twitter made a graph capture and tweeted it. It took the user @martop only 12 seconds to do it.

At noon the hashtag #RajoyMariquita became the number one trending topic (TT) in Spain, made headlines in digital newspapers and filled Twitter with jokes. I wondered, why it happened? I felt curious, I stopped what I was doing and I captured the tweets of this hashtag. Pulling the thread I found the hashtag source. It started when the user @SapoViolador (toad rapist) tried to generate at 16:00 on September 24 the TT #RajoyMariquita, inciting his followers to use the hashtag and helped by a set of bots (not sure if his or of a colleague). He did not achieve his objective but Twitter took note of this hastagh as a possible trend and used it to self-supplement #Rajoy hashtag. Twitter tried helping us like Microsoft, with its hated clip that was determined to help, or Android which suggests authentic atrocities when we try to write with our thumbs on mobile phones. In this case, the Twitter algorithm provided a poisoned help.

Fans of networks will love seeing bot’s relation symmetry, it was impossible it they were human users. 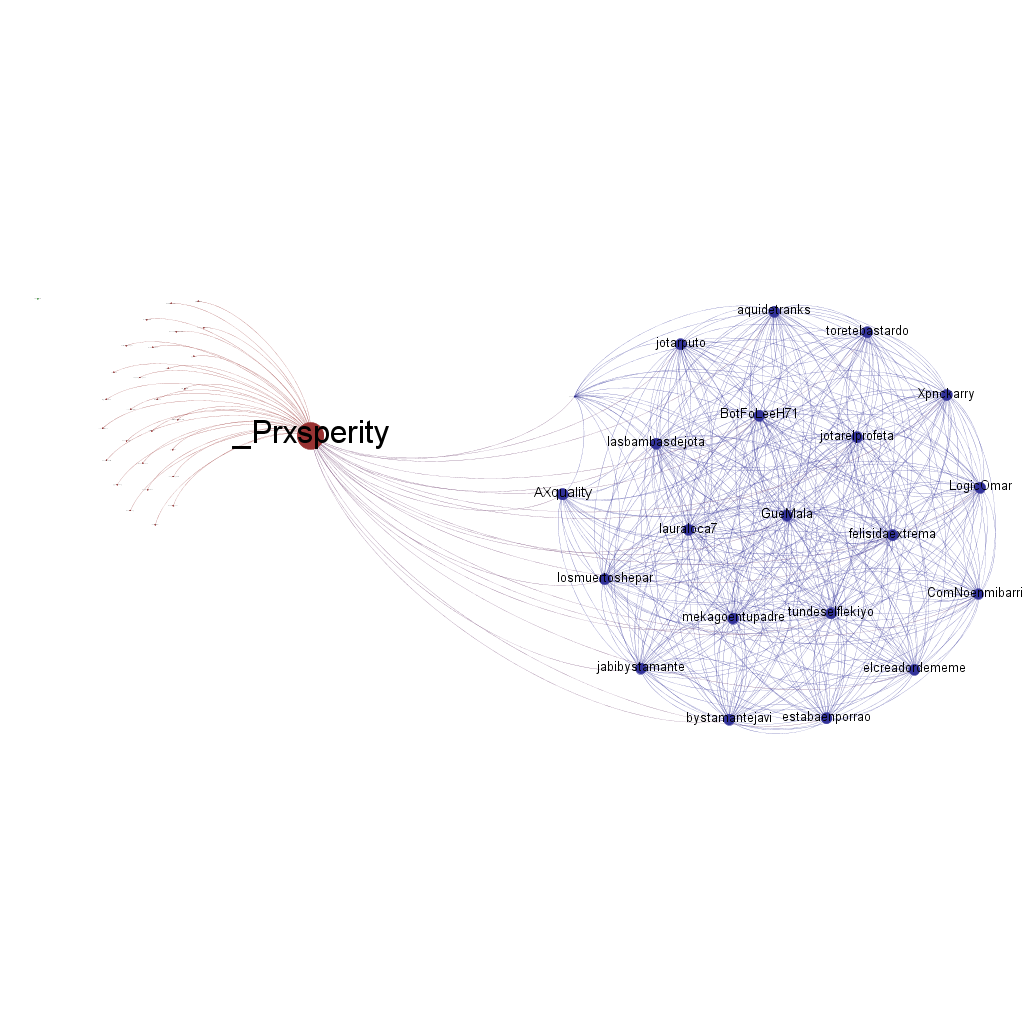 Due to lack of time I did not analyze the spread. Today, five months later, I found a moment to do so. I’ve noticed that I’m too busy, but it´s never too late if the analysis is good. In this case I have found evidence confirming that the reach is not enough to spread messages.

The main difference between the global spread and the propagation in Spain is the reach, four times bigger in the first case. However, the volume of tweets varies little in both scenarios. This is because the audience in Venezuela, Colombia and Mexico is not as responsive as in Spain to confusion #RajoyMariquita hashtag. That is, a large reach has low impact if the target is not encouraged in the message. If we look at the spread in Spain, we see that about midnight the 25th appears a very high reach, due to @DaniMateoAgain (with 905k followers), having little impact. The cause may be that the audience was saturated with it. It is similar to what happened in spreading tweet teletext, which @pacoleonbarrios (1.17 million followers) and @JavierCapitan (104K followers) also tweeted at night without getting a big impact.

In short: The reach works in an encouraged target and loses strength when the information is not current.

Possibly many already knew that but few have painted it in such detail as I have :-)