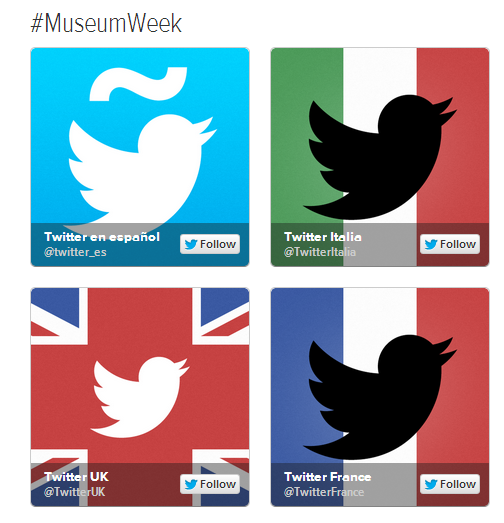 #MuseumWeek Support byTwitter arts   From March 24-30, museums across Europe took part in the first ever #MuseumWeek. You can follow all Participating museums across UK, France, Spain and Italy on these discover pages, and join the conversation by tweeting #MuseumWeek We have done an analysis of the first #MuseumWeek from three approaches, the first from the metrics provided by the t-hoarder tool, the second using network analysis with Gephi tool and the third showing a space-time spread made with a map cartodb   We can conclude that:

The first impression from the t-hoarder panel is it was a corporate event, as noted in its Article @arteinformado

In respect to message spread, the most popular tweets were written in English and contained most of them attractive photos. In the top ten mentions were four British Museums, three Italian, two French and one Spanish. The @muesodelprado was in the third place, tied with the @centropompidou .

We have built two networks, one for the replies and another for the RTs. In both networks, to avoid noise, we eliminated the bots @museumweekbot and @museumweekbotuk. The network’s nodes are the users and the links are the relations between them, the reply or RT from one user to another. Each node is identified by a label that corresponds to the Twitter profile and a color. The tag size is proportional to the node “PageRange ” in the network and the color indicates the community to which it belongs

The number of replies didn´t reach 10% of the messages, however there was conversation and it was focused on Latino Museums, Italians being the most talkative, followed by the Spanish and finally French. The conversation of the British Museum was testimonial. The following image shows both the overall graph as the country breakdown. We can see that users are grouped by country (or language) forming little connected communities. Conversation intensity is represented by the density of connections, while the size of the labels is proportional to the importance of the node in the network.

Over 60% of messages were RTs, the Anglo community being the most effective( 37.58% ), followed by Italy ( 13.57% ), thirdly Spain ( 12.45% ) and fourth France (12.02% ). The remaining communities were more blurred. As in the previous case, the following image shows both overall graph as the country breakdown. In this case a much denser graph with more defined and connected communities than in the conversation map. Likewise, communities were formed by countries (or language), the most prominent nodes, in some cases, are different to conversation map. Note: the graph of RTs was a large size (more than 50,000 nodes) it was not possible to generate with the Gephi tool and we pruned it removing the less active users. The graph below contains 15,000 nodes formed by the most active and most retweeted users. This pruning may affect the size of the most prominent nodes, but not too much because we used “PageRank” to highlight the nodes.

Approximately geolocated tweets are usually 1%. This sample is enough to give us an idea of the geographical distribution of tweets over time, even though this value is so low. We can see the highest concentration of tweets were in UK and Italy . Outside Europe the most active country was the United States. The British and Italians were the first to participate and had a more distributed participation, while French and Spanish were added later and did so from the main cities.