A week ago Antonio Delgado suggested I write about the hashtag #ZapataDimisión but I was too busy reviewing a vital paper for my thesis. I collected the data but I had to postpose the analysis until right now. #ZapataDimisión’s case could mark a before and after in the use of social media in Spain.

Lately Twitter is becoming a battlefield in which users are polarized for any event. When a controversy becomes TT (Trending Topic) it attains a general visibility beyond the timeline, sometimes going outside of Twitter as a news item on traditional media. For this reason TT´s have an enormous spread potential and we always ask ourselves if it was spontaneous or manipulated.

TT´s could be compared to a fire whose cause is unknown natural or arson until it is analysed the origin and the factors that favoured its spread. In the same way we were analysing the TT #ZapataDimision, looking into the hashtag´s origin, the first propagations, how it spread, who were the most spread users and what was the role of the media.

The first tweet was detected with the hashtag #zapatadimision was published by José Luis Vázquez at 17:17 on 13 June.

The following interactive image contrasts the global spread with polarized propagation. RT relation was used to determine the polarity of the users who participated. Users tend to retweet if they agree, this causes some users are more interrelated than others and forming communities. By this method (see methodology at the foot of the post) the users were classified as pro-Zapata and anti-Zapata and their tweets are segregated into two separate datasets to see their evolution in time. These two groups published the 94.74% of the tweets, the remaining 5.26% were uncertain users (retweeted to both polarities) and people did not retweet. The accuracy of this classification was manually checked over a random sample of 300 tweets in each datasets. For anti-Zapata tweets precision was 94.33% and for the pro-Zapata 92%.

Much ado About Nothing?

One way to understand the true dimension of a TT is measuring how many tweets were original or RTs and what the distribution of RTs per user was. Participation on social media follows a power law distribution in which a minority is the source of most of the information spread. Broadly we can identify the critical mass that caused most of the messages.

To know the distribution of anti-Zapata RT’s, the users were classified according their activity (the classification details below, at methodology) and found that the speakers, 508 users, received 52,415 RT’s, so 2.65 % of users obtained 79,99% of RT’s against Zapata.

The following interactive graphic show the classification of anti-Zapata users based on the impact of their tweets. Clicking on each users group can see at the bottom the users ordered by the number of RT’s received.

Likewise we can see in the following interactive graphic the RT activity of anti-Zapata users. We found 2,830 users that retweeted 37,641messages, so 14.74% of users retweeted 57.44% of messages.

The hard core of those who moved tweets was about 3.500 users. We can conclude that there was more bark than bite.

The role of the speakers and the media

To see how the speakers and the media influenced the spread we have created three graphics temporarily aligned. The first one is the time evolution of total tweets, anti-Zapata and pro-zapata. The second shows the distribution of the twenty most widespread tweets, both anti-and pro-Zapata Zapata (used a colour code to group. Anti-Zapata blue, purple pro-Zapata and green neutral. Mouse over the graphic displays text of the tweet and see the number of RT’s that had at that time). The third graph shows the spread of the tweets of the media and journalists.

During the 13th June the pattern of diffusion of second and third graphs was similar because pedroj_ramirez and isanseba messages were almost all in the top 20 and there weren’t other journalists publishing tweets. On day 14th June, the propagation of journalists users lost weight against other influential users.

We could conclude that pedroj_ramirez and isanseba messages helped to create TT on 13th but on the 14th other users intervened.

The polarization of users is reflected in this RT’s graph. On the left, in a single community, they are those who supported Zapata and right attacked him, formed by several groups sympathetic to the Jewish community and people of liberal-conservative ideology. 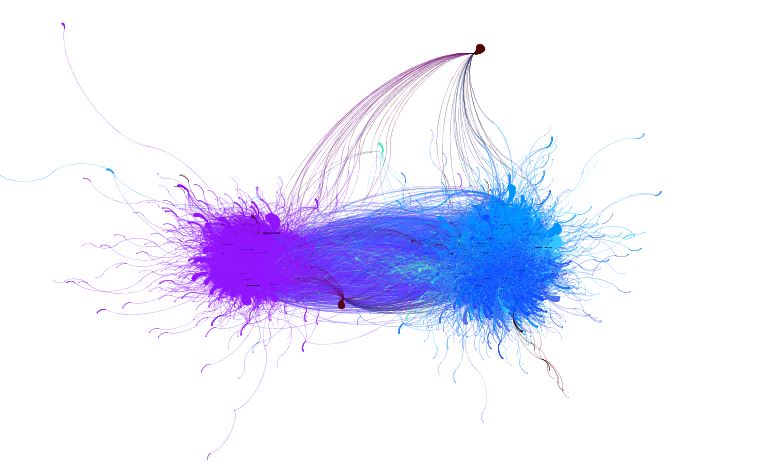